Richard Davies Posted on May 21, 2018 Posted in digital, doodle pen and ink, Uncategorized No Comments 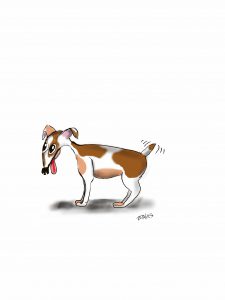 Winston looked at the puppy, who was already staring at him. His little nub of a tail began to wag as if he knew something good was going to happen. What’s his name?”…Winston asked. “Doesn’t have one yet” the man replied.  “What would I have to do if I wanted to keep him?” Winston asked.  “Come in sign some papers, get his tags and he’s all yours…he laughed…but I think he knows he already is. Would you look at that tail go”.

Winston went inside and was filling out the paper work when he came to the blank spaces that said…animal breed and animal’s name. “Just put mixed in the

breed blank and whatever you want in the name blank” the man said, standing behind the counter.  Winston thought a minute.  “Sparks. I’m going to call you Sparks. We would have never met had those wires not sparked and brought you to me. I knew there was something special about today”. 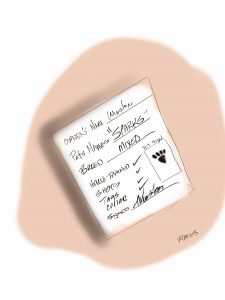 Winston put the papers in his pocket, paid for the small red collar and leash, attached the dog tags and he and Sparks headed out the front door toward the square.

Even though Sparks was a puppy he mimicked Winston’s every move. It was as if he had been trained by a professional. Winston was amazed. Everywhere he went that day he was complimented about Sparks.

Shopping done the duo headed home. As Winston approached his neighbor Mike’s house Mike shouted “Winston…where’d you get that dog?” Winston replied…”I didn’t get the dog…he got me.  See you in the morning Mike.”

Now you know the story…come check in once in a while and see what’s up with Winston, Sparks and the “Mind of D”